At Big Brothers Big Sisters, our vision is that all children achieve success in life. Therefore, we are excited to announce we are partnering with The Cagle Law Firm, P.C. in Austin to award two outstanding high school seniors a college scholarship of $1,000 each. We want to award students in our program who share our values of helping those in need and giving back to the community.

More about the Scholarship
The scholarship is open to current college students and high school seniors with a minimum GPA of 2.5.

In addition to filling out the application the applicants are asked to complete an essay highlighting how Big Brothers Big Sisters has influenced their lives and their decision to pursue a higher education.

Good luck to all the applicants!

“At times our own light goes out and is rekindled by a spark from another person. Each of us has cause to think with deep gratitude of those who have lighted the flame within us.”  – Albert Schweitzer

This 2017 Thanksgiving season marks an unprecedented moment in time for Big Brothers Big Sisters of Central Texas as we reflect on a year of dreams come true. With thanks to donors, volunteers, families and Littles, board members, staff, and the community, we’ve had a banner year.

We celebrate being in our new Mentoring Center for over a year and all of the opportunities that has provided. We are connecting with our community and matches in ways we’ve never done before.

We are thankful for a year of achievement. In 2017 our work was recognized and honored with numerous awards:
2017 was also a time of new initiatives as BBBS launched several new programs:

We have a dynamic professional staff in place, a new facility, our quality metrics are at an all-time high, and we have a mentoring model that works. Our dreams are a reality because of you.

I am so thankful for your commitment to BBBS’ mission. We are grateful for the opportunity to work alongside you as we strive to make every child’s dream of success come true.

Community engagement is an important part of Big Brothers Big Sisters’ work. Now, a new group is turning that emphasis on community inward in order to create a greater sense of connectivity between and among BBBS Bigs and matches.

The new group is called BIG – The Big Impact Group. It is made up of Bigs and other volunteers who are connected with BBBS. Launched in May, the group is using their networking skills and resources to help the organization as a whole.

“I’m so proud of being a part of this organization (BBBS), and I wanted more,” said Michaela Lindsay, a former Big Sister and one of the founders of the new group. “As Bigs, we all feel so strongly about our experiences that we wanted to create an additional sense of community between and among other Bigs.”

Michaela became aware of the need for this type of community when her own match came to an end as her Little Sister Aracely graduated from high school. “We were told that our match would be closing and we were kind of caught off guard by that because we hang out together all the time,” Michaela explained. “So, we approached BBBS about wanting to stay involved with the organization because it’s been such a positive experience for us.”

Michaela believed she had a lot of skills and resources to offer to help meet some of the organization’s needs, and she wanted to keep her Little Sister connected with the agency as well. “Aracely particularly wanted to give back to other high-school-aged Littles,” said Michaela.

Michaela met with Joe Strychalski, BBBS Vice President of Programs, and Christina Snell, Match Support Supervisor, to start the conversation. After months of research and collecting ideas, the Big Impact Group was formed. “We identified a few needs that we thought we might be able to help meet if we mobilized some of our most engaged Bigs and supporters,” said Joe. “Those needs were additional funding to help hire more staff to serve more kids; recruiting volunteers – specifically men, men of color, and bilingual Bigs; and better connecting our Bigs.”

Connecting Bigs seemed like a natural place for the group to start. BBBS matches have match support specialists who do exceptional jobs of helping Bigs in their one-to-one relationships with their Littles, but even with this help matches can sometimes feel isolated from other matches. The Big Impact Group is working on strategies to address this.

“I’ve met so many wonderful people in this group,” said Michaela. “They are passionate about mentorship and have dedicated a significant portion of their time to it. I was involved with BBBS for 5 years and never made these kinds of connections before. So, that has already been a huge benefit of this group!”

To help build connections, the Big Impact Group is launching a Facebook group for Bigs and plans to be a point of contact for future match events. “Sometimes you show up for a match outing like a Round Rock Express baseball game and don’t even realize you’re sitting next to another match,” Michaela continued. “We want to be a point of contact to say, ‘Hey, we’ll meet at this location before the game. Come say ‘hi’ and get to know other Bigs and Littles and help us build a greater sense of community.”

To help BBBS recruit new volunteers, the group has set a goal of enlisting 50 male Bigs. They are planning to use their personal networks to get information out to those who might not be familiar with the organization.  “We want to let people know what is involved and what it means to be a Big. Especially potential male mentors,” said Michaela. “We’re interested in making legitimate connections for BBBS staff to pursue. I’m involved in the MBA program at UT which is a predominately male group. There could be a lot of student interest in the program there.”

To support fundraising, the Big Impact Group has set a goal of raising $50,000 and is scheduling several fundraising events. “Our first event was the ‘Notworking for Charity’ event that we held in late July,” said Joe. “We raised about $8,000, had approximately 200 participants, and 20 people expressed an interest in becoming Bigs.”

The group also has plans for events that satisfy multiple goals such as the Dynamic Duo Fitness Challenge coming up on November 12. This event will give matches a chance to have fun and get acquainted, while also raising funds for BBBS. The group is working on several other events including SantaCon, which will take place downtown on December 9th.

“Our target member for the group is someone who is already connected with BBBS,” said Michaela. “The Big Impact Group is just getting off the ground so we’re interested in attracting additional members. We want to include people who are already familiar with the organization. For instance, there may be people out there who have participated in Bowl for Kids every year and who haven’t necessarily volunteered as Bigs, but who are fully aware of BBBS’ mission and who have been impacted by the organization.”

Membership requirements for the group include: a one-year commitment to the group and attendance at monthly meetings; supporting BBBS financially – as a Game Changer making monthly donations at any level, or making a meaningful personal contribution to BBBS; being a current or past Big/BBBS participant; being a young professional currently engaged with BBBS, or being someone who is interested in future BBBS Board service.

“If someone is interested in joining the group I visit with them first,” said Joe. “I go over the expectations and requirements of membership because we want to make sure people know that this is a working group first and that there are high expectations. There is a social, networking component to our efforts and it is a fun group, but we expect our members to bring their resources – whether time, talent or treasure –  to help us meet our goals.”

“I would love to have more members and to hear more about what Bigs are looking for out of their participation,” Michaela said. “There are professional organizations for everything from sports to fine arts. The Big Impact Group exists to enrich the experience of Bigs and matches, to help the agency with fundraising and recruitment needs, and to build further awareness of BBBS.” 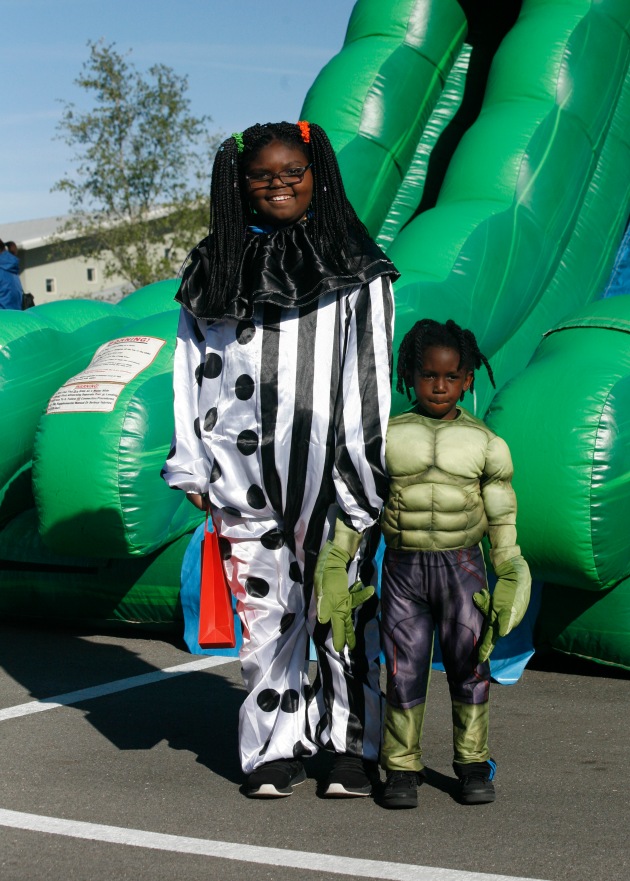 Bigs, Littles and staff members embraced the cold morning and made it a day to remember. Matches enjoyed each other’s company as they played carnival-themed games, created craft projects, and ate delectable Halloween candy.

“It is such a joy to hold this event every year,” said Brent Fields, CEO of Big Brothers Big Sisters. “It is great to see matches interacting with one another. Our staff enjoys this chance to spend time with matches as well. Bringing people together is what BBBS is all about, and this event is a great opportunity to do that.”

“This was my first year at the Fall Carnival,” said Ana, one of BBBS’s match support specialists. “I learned that kids will do anything for candy! I was able to spend one-on-one time with my matches, which was pretty awesome. That morning I even did a match introduction and the match was able to experience BBBS for the first time at the event. Overall, our Fall Carnival was great and very fun.”

Representatives from Austin’s Fire Department No. 14 and the Austin Police Department’s mounted patrol also took part in the festivities, showing and demonstrating their gear. They even allowed kids to climb to the top of the bright red fire truck and to pet their patrol horses. 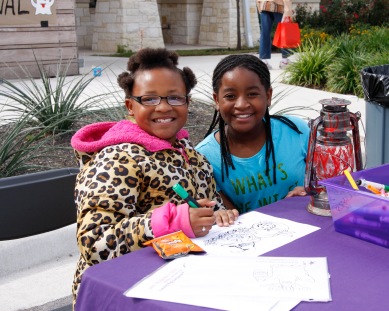 Another great feature of this year’s carnival was the “Big Futures Live Forward Resource Fair” that took place inside the mentoring center.  The purpose of this event was to connect recent high school graduates and current high school Littles with resources for finishing high school, financial literacy, job training, and higher education.

Littles had the opportunity to check on their BBBS’ scholarships and to speak with representatives from organizations such as Austin Community College, Huston-Tillotson University, Peloton U, Goodwill’s Workforce Innovation and Opportunity Act Program, BB&T Bank, American Youth Works, and E4 Youth. There were also helpful promotional materials from St. Edward’s University and The Austin Chamber of Commerce’s Financial Aid Saturdays.

“It was awesome to see Littles and their Bigs really take their time at these booths to talk about the futures our Littles see themselves striving towards,” said Candace Bunkley, BBBS’ scholarship coordinator.

BBBS’ carnival brought together a diverse group of participants: Bigs, Littles and their families, board members, staff members, volunteers, community partners and friends, as well as children from our Rathgeber Village neighbor, Austin Children’s Services.

This event would not have been possible without the generosity and participation of numerous sponsors and volunteers. We offer special thanks to Krispy Kreme Doughnuts, Intersys Consulting, The University of Texas at Austin McCombs School of Business, Edible Arrangements, the Young Men’s Service League, the Austin Police Department, the Austin Fire Department, Bounce Around Austin, MyEventistheBomb, Kind Bars, Hapi Drinks, and General Motors, as well as those who were part of our Live Forward Resource Fair.

Our mission is to provide children facing adversity with strong and enduring, professionally supported one-to-one relationships that change their lives for the better, forever.